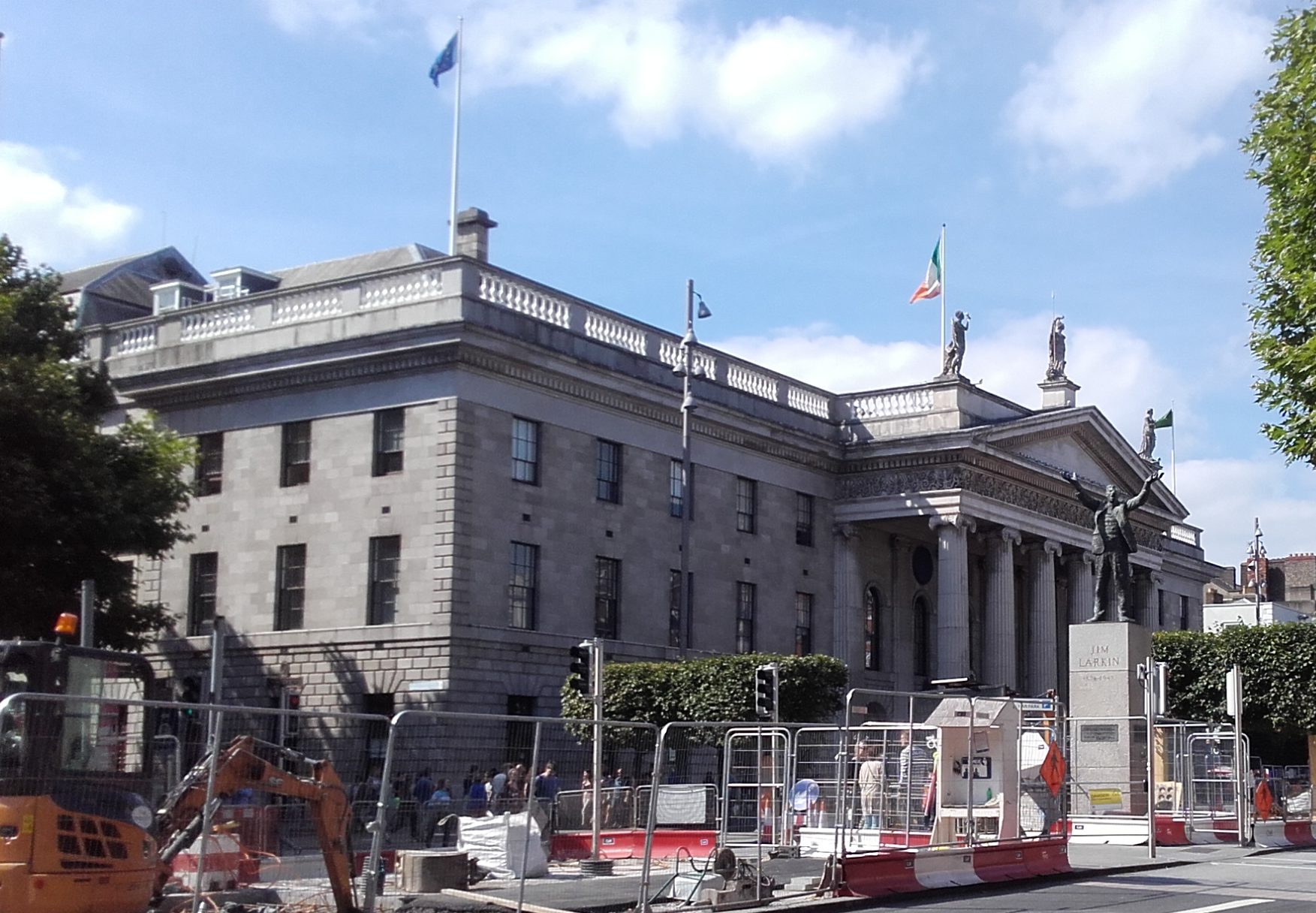 On Easter Monday in 1916 Irish nationalists took up arms and seized selected buildings in Dublin for days. The British army was so involved in the first World War that they had problems to get the rebellion under control – a rebellion that made history and is known today as Easter Rising.

In 2016 I travelled to Dublin, exactly 100 years after the Easter Rising took place here. Flags, posters and bus advertisements reminded of this meaningful Irish rebellion.

After a trip to Dublin probably every visitor knows a thing or two about the Easter Rising. After all, there is one main tourist attraction that is associated with it – the General Post Office (GPO).

The probably most famous post office in the world – the General Post Office (GPO) in Dublin – was seized for days during Easter in 1916. The post office was the headquarters of the Rising and from its stairs the independence of Ireland was proclaimed.

Today, the GPO is a main tourist attraction in Dublin. It is also still a post office, so the entrance is for free. There is a little museum giving details about the history of the Easter Rising and there are also guided tours. Close to the entrance, a miniature version of the building is situated. Little plastic soldiers are fighting each other on the grounds of that miniature – the British army and the Irish nationalists.

But even without its historic importance the building would be worth a visit. The huge stone pillars at the front reminded me of some old Greek building. Stepping inside I felt taken back in time to the 19th century. This feeling was triggered by the high walls, the marble floor and the post office counters that look like old bank teller windows.

Reasons leading to the Rising

Great Britain increased its influence in Ireland from the 12th century onwards. In 1800 the Act of Union ended the independence of Ireland integrating it within the United Kingdom. This union was a major cut in the national pride of the Irish.

During the First World War the British army was busy fighting at the frontlines. The missing troops in the country made it vulnerable within its own boarders. The Irish nationalists didn’t let this chance pass. They started a rebellion and seized selected buildings in Dublin. The Irish Republican Brotherhood (IRB) had taken a leading role in this Easter Rising. In total there were about 1600 rebels involved (this number includes groups like the Irish Volunteers and the Irish Citizen Army). This high number of supporters was essential to make the Easter Rising last for days. It was not the first rebellion of the IRB but, looking back, it was probably the most effective.

Ultimately, the British army was able to end the rebellion. Its leaders were executed. But the fight for an independent Ireland had begun and was unstoppable.

The Irish nationalists figured that their chances to succeed would be bigger if they allied with Germany. Roger Casement managed to organise the transport of German arms and ammunition with a ship. But the smuggling didn’t go unnoticed. The captain had to give up the ship and Roger Casement was sentenced to death for treason.

Despite this failed attempt of weapon smuggling the Easter Rising was executed as planned. Selected buildings were seized on Easter Monday, among them the GPO. On the same day, Patrick Pearse – one of the leaders of the rebellion, stepped on the stairs in front of the General Post Office and proclaimed the independence of Ireland. Members of the IRB would represent the provisional government.

But the Irish population was not as supportive of the rebellion as the rebels had hoped. During the days of the Easter Rising 450 people had to die and around 2000 people were injured. The violence and destruction was disapproved by many citizens. The British government showed no tolerance for the rebels and their intentions. All leaders were executed and around 3000 people directly or indirectly involved in the Easter Rising were arrested. These harsh punishments turned the tide. The Irish population was horrified by the brutality of the British reign and became more determined than ever to become independent again.

The aftermath of the Easter Rising

Eamon de Valera was one of the rebels sentenced to death. But in the end he was spared and served a short sentence before being released. With the political party Sinn Fein he could continue the rebellion on a political level.

Sinn Fein wanted an independent Ireland and found a lot of supporters during the general election in 1918. The party was able to gain the majority of Irish seats in the British parliament but the members of the party didn’t intend to take part in the meetings in London. They made their own meetings in Dublin and established the Irish parliament (Dail Eireann). The independence of Ireland was declared once more. What followed was the Irish War of Independence that lasted from 1919 to 1921.

But the peace treaty signed after the war felt like an unsatisfying compromise for many Irish. The Irish Civil War and further political interference were the consequence. It took Ireland many years to finally gain its independence again. On Easter Monday in 1949 the independent Republic of Ireland was formally proclaimed.