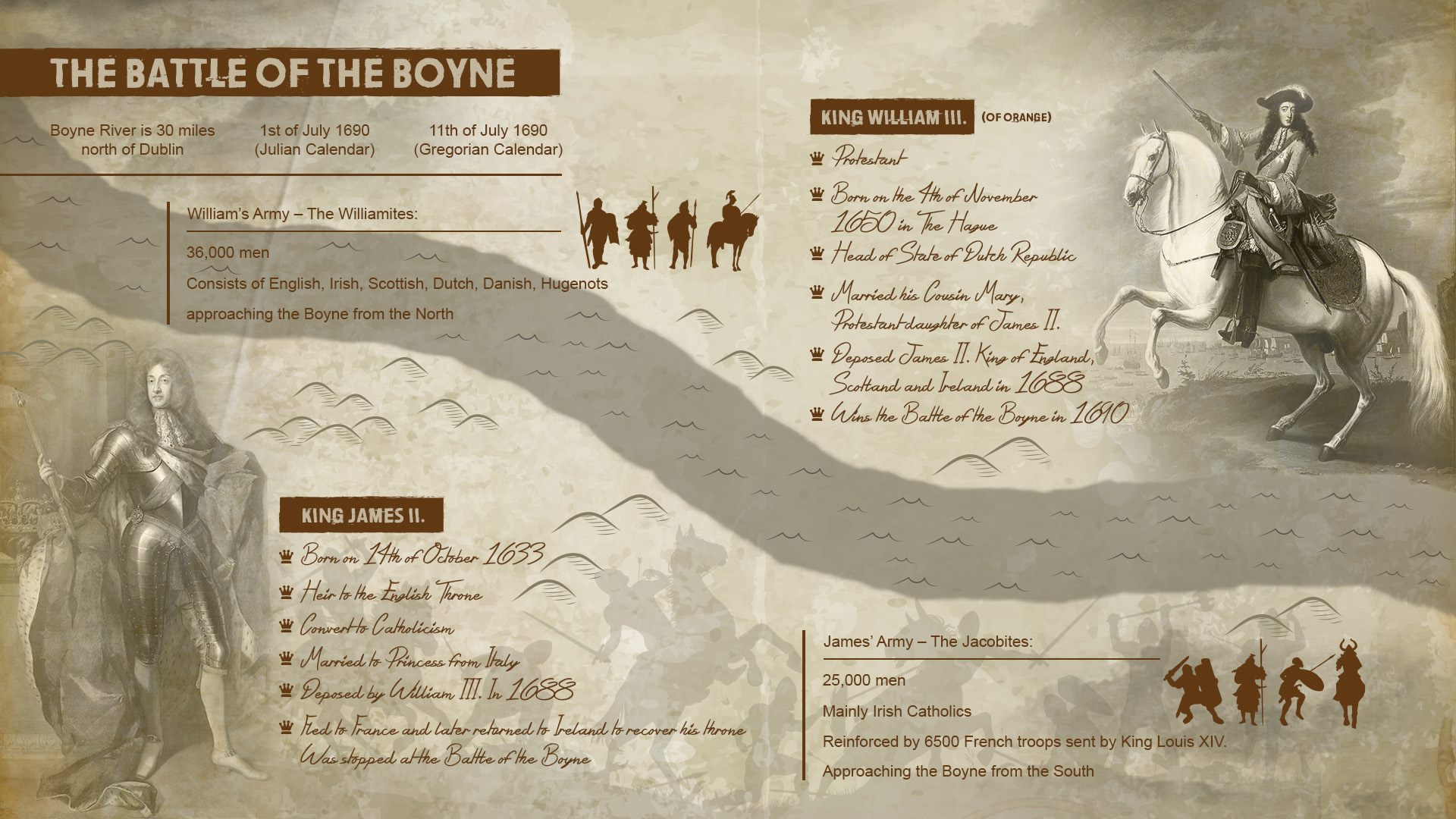 Today, 327 years ago, the Battle of the Boyne took place about 30 miles north of Dublin. King William III. faced his father-in-law James II. at the river and successfully defeated his opponents’ army. But there is more behind this fierce fight than just family rivalry.

James II. converted to Catholicism even before he became King of England, Scotland, and Ireland in 1685. During his reign, he stood up for Catholic rights, much to the dislike of the Protestants in his country. James even had to fight a resistant parliament to gain his will. When his second wife Mary of Modena gave birth to a son in 1688, the Protestant nobles feared the Catholic rule would continue for generations to come. So they turned to William III. for help.

William III. the Dutch that conquered it all

William III. was born in the Netherlands and belonged to the powerful House of Orange. In 1673 he fought off the armies of Louis XIV., saving his people from the “Catholic invasion.” Four years later William married his cousin Mary, the daughter of James II. Mary was a child of James’ first marriage and therefore raised as a Protestant. James’ brother supported the marriage.

With William and Mary, the British people had hopes for a Protestant heir to the throne. These hopes were crashed with the birth of James’ Catholic son in 1688.

In the same year William III. saw his chance to invade England, wanting to “maintain the liberties of England and the Protestant religion.” He had the full support of the Protestant elite and was able to land in Torbay, Devon with his troops. William’s primary motive to invade England, however, was his need for a strong ally against his biggest foe: Louis XIV. of France.

When the word spread that William III. was invading the country, anti-Catholic riots broke out in many cities. James II. was willing to fight his son in law and mobilized a huge army, but the king had a lot of Orangists (supporters of William) in his family and army, plotting against him. On top of that James was suffering from poor health. Therefore, it made more sense for him to flee the country and leave the Crown to William and Mary. But William and James should meet again two years later – at the Battle of the Boyne.

The Battle of the Boyne

After successfully fleeing to France, James II. returned to Ireland in 1689. He was supported with troops by King Louis XIV of France, the “arch-enemy” of William III. Via Ireland James wanted to reconquer England. In Ireland, James troops were joined by Irish Catholics who were eager to fight off the Protestant King William. The latter entered Ireland via the shore of Carrick fergus, north of Belfast, and moved towards Dublin. The armies of William and James clashed at the river Boyne, about 30 miles north of Dublin. The battle lasted about 4 hours and ended with James and his men retreating eventually. James later fled back to France.

With his victory at the Battle of the Boyne William III. once and for all ended the reign of the Stuarts and secured the Crown of England, Scotland, and Ireland for himself. The Protestants who had settled in Ireland during the so-called “Plantations” could take a deep breath too. As long as a Protestant would rule Ireland, they had nothing to fear.

The Battle of the Boyne Website (retrieved: 9th of July 2017)