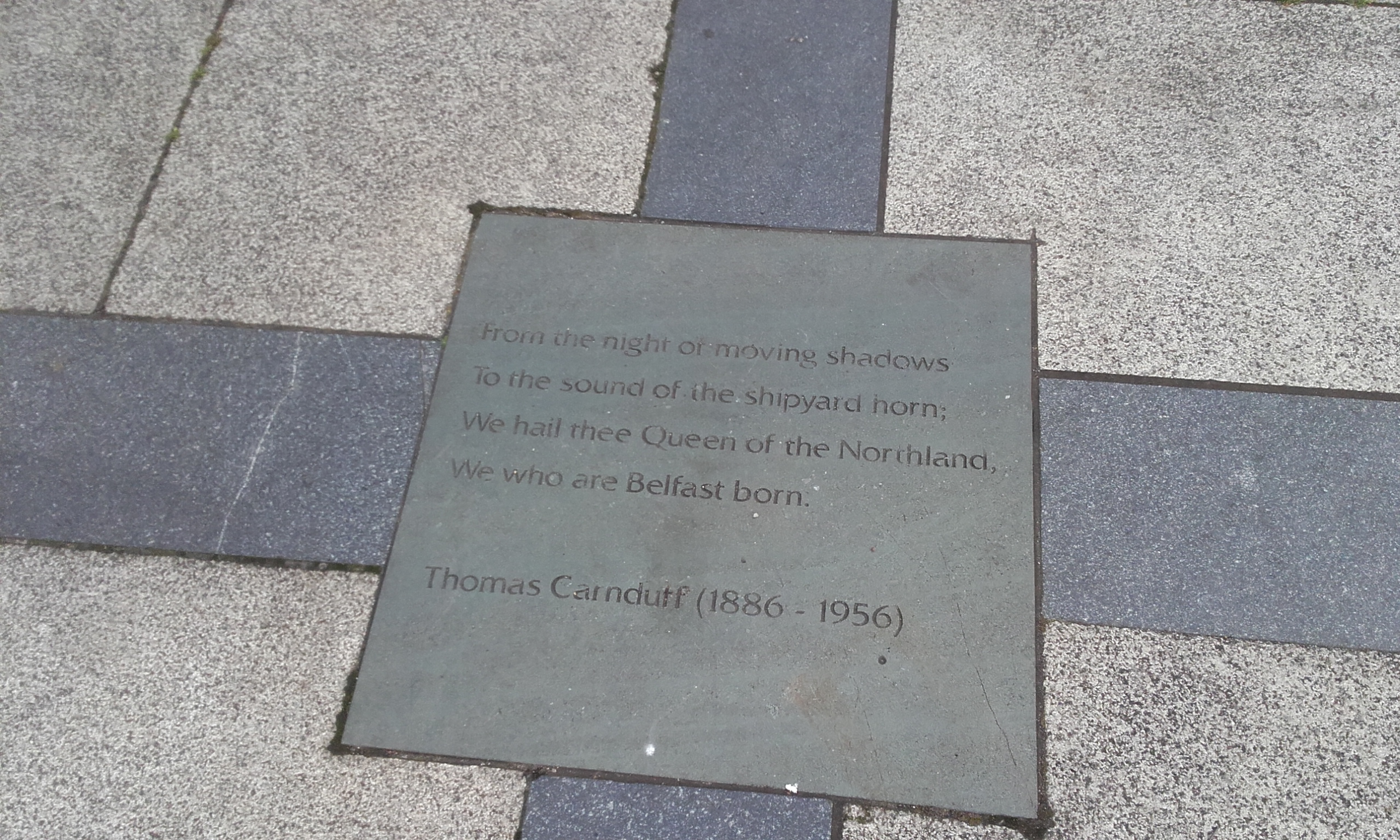 Belfast is often associated with two tragic historic events: the maiden voyage of Titanic and the Troubles. As a holiday destination, the city is underrated and (hopefully) stays an insider tip a little bit longer. Magnificent buildings, an awesome nightlife and great possibilities for shopping – Belfast offers all a tourist’s heart desires. The city itself can be discovered within 2 to 3 days. The clever tourist adds one day or the other and takes trips into the astonishing surrounding region.  In this blog series we will discover the different sights and faces of Belfast.

A good starting point for a tour through the centre is the Belfast City Hall at Donegall Square. From June to September you can take part in a one-hour, free guided tour and dive into the history of this magnificent building.  After the tour, the park surrounding the City Hall offers a great place for recreation.

The grounds on which the City Hall was build are rich on history themselves. The area once was a formal garden of a castle. In 1778 the White Linen Hall was built exactly on this spot, used as a market place for white linen. It was the times of excessive linen production in the city. In Belfast alone 900,000 spindles were in use, making the city the number one producer of linen, earning itself its nickname ’Linenopolis’.

When Belfast gained city status from Queen Victoria back in 1888, the City Hall was build and opened in 1906. Surrounding the City Hall are magnificent other buildings of the early 20th century, like for example the Scottish Temperance Institution. Behind the City Hall stretches the Linen Quarter, the name hinting at the production halls that used to be around in those areas.

Tipp: The Linen Hall Library just opposite of the City Hall is worth a visit. The library, founded in 1788, originally was located within the White Linen Hall, thereby receiving its name.  Today the library is situated in a former linen warehouse build in the 1860s. The vast collection of local history is definitely worth discovering.

From Belfast City Hall to the Cathedral Quarter

Leaving Belfast City Hall behind, there is something interesting to discover in every direction. Standing at the main gate of the City Hall, I found it most tempting to take a stroll down the main street named Donegall PI. Huge sails of metal and fabric are positioned to the left and right of the street. Each of them symbolling a ship that was built in Belfast, like Titanic or Laurentic.

Donegall PI offers a vast number of shops. I couldn’t resist to enter one souvenir shop and get myself this dark green T-shirt with white letters stating: Belfast – probably the best city in the world. Turning into the side street Castle Lane, I approached the Spirit of Belfast, a sculpture in front of Victoria Square – a shopping centre.

Via Corn Market and Castle PI, I returned to the main street. Here at the intersection of Donegall PI and Royal Avenue the view back to the City Hall makes me pause for a moment. The houses and the “artificial sails” of the main road are framing the City Hall in the distance perfectly.

Following Royal Avenue, on the left-hand side the shopping centre Castle court appears. After some shopping time, I continue entering Rosemary Street. Here I pass the first Presbyterian Church Belfast, founded in 1644. Granted, it looks more like the villa of an upper-class family.

Rosemary Street leads on to Waring Street where I turned left into Donegall Street. The sight I am aiming for is the St. Anne’s Cathedral. The construction of the hiberno-romanesque Cathedral was started in 1899. Originally another church was standing at the exact same spot: The St. Anne Parish Church. In order to make the service of the church continue, the cathedral was built around it. But in the end the church had to make space for something bigger and greater. The demolition took place in 1903.

On the opposite to the cathedral is a huge square – the writers’ square. Words of local writers are carved into the stone on the ground, writers like Robert Lloyd Praeger, W.R. Rodgers and Roy McFadden. The quotes give you a sense of what Belfast was like in the early 20th century. As Thomas Carnduff (1886-1956) puts it:

From the night of moving shadows

To the sound of the shipyard horn;

We hail thee Queen of the Northland,

We who are Belfast born.

Without even fully realizing it yet, I had entered Cathedral Quarter – named after the St. Anne’s Cathedral. This area has turned into a place where artists and craftsmen feel at home. Once a year they celebrate the “Cathedral Quarter Arts Festival” on writers’ square. A lot of pubs and restaurants are hidden in the narrow cobble streets and courtyards of Cathedral Quarter. Chains of lights and appealing street art create the perfect backdrop for a night out in Belfast.